I visited the cave while on a pilgrimage to the Dominican Republic. This pilgrimage included returning my Grams' ashes to our village. My stop in San Cristobal was a spiritual preparation for what would be my first visit to our village without her.

I learned of Bibiana while researching Taino history in San Cristobal. I had a list of sites to visit but when I set out with some new friends to visit the site I had no idea what impact it would have on me. Bibiana was known as a healer and lived in these caves until her death in 1925.She identified as india, taína. Her parents María Benita de la Rosa and el Indio Quiterio, were from San Juan de la Maguana.

What I didn't realize was how difficult the trip would be. There is a road to the cave, but it requires a 4x4. We were not in a 4x4. You can also get there via moped, but my guides didn't think a moped would be safe on such a dangerous road. So we walked. And walked. 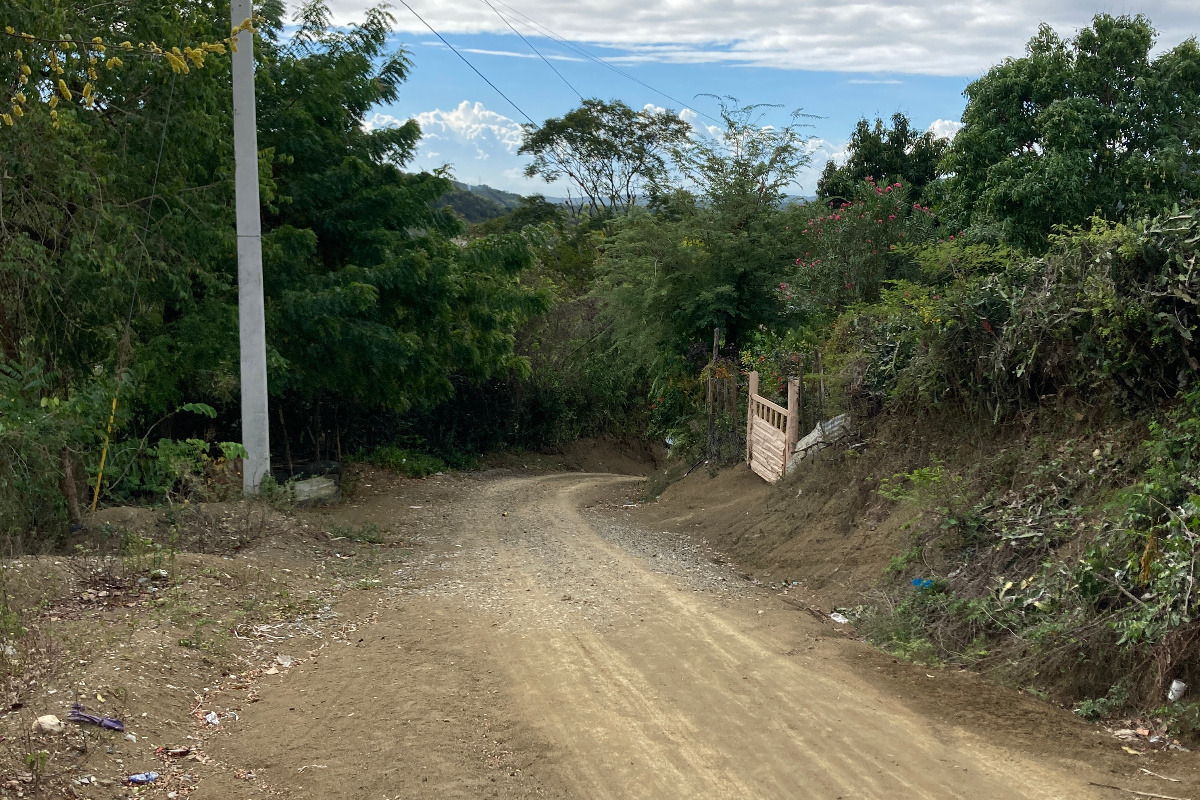 The road is there, but it winds, and pivots and inclines 70 degrees at times. I stopped multiple times on the road because I thought I would die. I kept using the views as an excuse. But at times all I saw was white... When my eyes could they captured the beauty of the location, and the damage we have done to it.

As we climbed Valdesia Dam grew smaller... what became larger was the dried out Nizao River. Since the dam was built a community previously dependent on the river for agriculture and fishing has lost economic options. The climb is slow as if slowly unfolding the story of our ancestors, of this village. I was hyperventilating as I climbed so I don't know how much of my breathe was taken by the climb or the inflammation which envelopes my spine.

After dragging my spirit up this hill for two hours we reached a path that looked like it could lead to a cave. We followed it. It led us back to the main road, but helped us avoid a final hill. The next path we found led us up a bit but then split. There were small homes to the left and right. I didn't have the energy to be wrong again, so I suddenly decided to quit.

Luckily a man was coming from the left. We asked him if we could reach Bibiana’s cave that way. He said yes, he was coming from there now. My companion says "thank god because she’s come from the US and we sorta got lost". He says "no, you found it, I should know! I’m her great grandson Ney de la Rosa".

Ney was the great gradson of the woman that I was searching for. He mentioned that usually he would leave earlier in the day because no one in their right mind would hike that hill at high noon. No one but a silly tourist from NYC.

He offers to turn back and guide us. 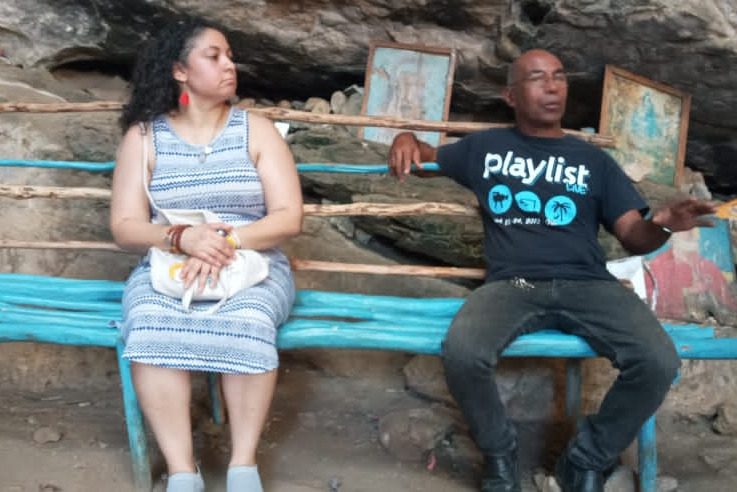 He sits with us, walks with us, and over hours he shares his memories of his great grandmother... and the sadness he felt seeing what had become of the cave over the years. After we take in the destruction that has been caused i begin to walk around the main cave.

It is littered with trash, beer bottles and religious obsessions. When Bibiana practiced in this cave she, like Papa Liborio, leaned on her indigenous knowledge to cure those that came looking for her. She also incorporated prayers, and catholicism. But the cave has been completely covered in fanaticism. There are altars used by several practicioners an one has built a home at the entrance of the cave to shorten his pilgrimage.

Key to her practice was water which poured from "el ojo del indio" a natural water source in one of the inner chambers. This small water source has dried out after years of abuse, I found it covered by candle wax and offerings. The water is no longer able to freely flow. Bibiana slept in this cave, and even the nook she slept in has been covered in paintings of crosses and murals of saints.

Deep in the cave system there is a smaller cave called "salon de las media noche" because of how dark it is in there. While there Ney showed us the inner cave that his father would practice in and recalled spending days watching his elders heal. He also remembered how the river, Nizao, could be sensed through a crack in the wall. Since the dam was built that has stopped happening.

But the place where I became overwhelmed by emotions, and responsibility was the spot where Bibiana would sit and wait for her visitors. In that spot one can touch the petroglyphs. These markings made via chiseling shot through me a current. In that moment my identity became clear. Through that clarity I saw the erasure and vilification of my heritage. 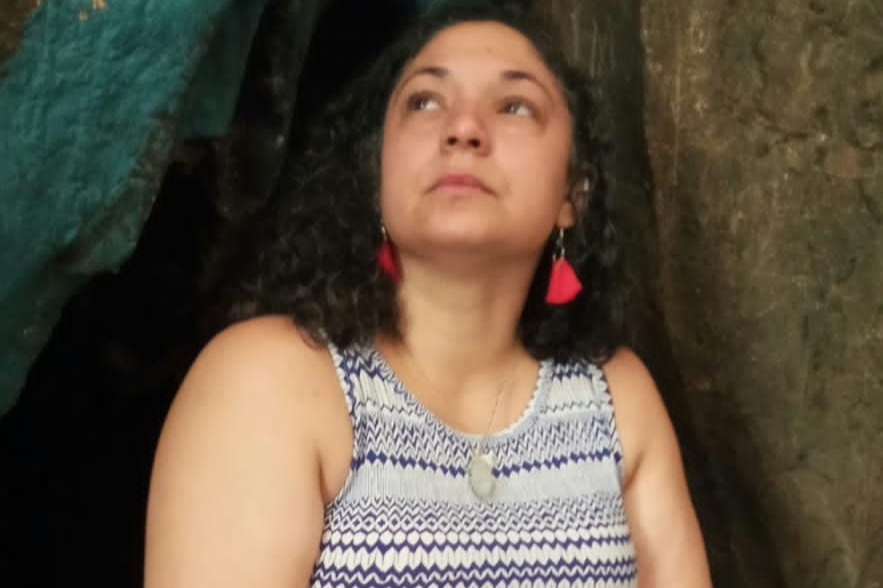 For generations Dominicans have lost themselves following the voices of outsiders. It began with Guacanagaríx, continued as our spirituality was undermined by Catholics and Christians. Today for many the religion of choice is capitalism, accompanied by Americanism. Sitting in this spot I felt the defeat our Taino ancestors felt watching the world chip away at us, having their remnants overlooked. As I turned around and took a look at what had become of the cave where Bibiana healed I felt sick.

I didn't make a promise that day because I am too logical to do that. But on our way down the hill I manifested some ice cream and a walking stick. I spoke with Ney about the community, what had led to the destruction of the cave. As he spoke of the decline in economic opportunities, the degradation of the environment, the introduction of modified seeds my brain churned.

This churning has led me to partner with the community, and start this crowdfunding campaign.

Our goals is huge: restore the cave! To do this we need to:

The money raised via this GoFundMe will support the work at all stages! Ney and members of the community began working the last week of August 2021. We want to pay them fair wages. That will be the first expense for this campaign!